I have heard a few people say that the lightning port on the iPhone 5 was a bad strategic decision. The argument can be summarized by quoting David Pouge’s review.

Third, compatibility. The iPhone’s ubiquity has led to a universe of accessories that fit it. Walk into a hotel room, and there’s probably an iPhone connector built into the alarm clock.

If you had to write a term paper for this course, you might open with this argument: that in creating the new iPhone 5 ($200 with contract), Apple strengthened its first two advantages [design and superior components] — but handed its rivals the third one on a silver platter.

The problem with this argument is that if people were really so upset and went to the competition, they would still not be able to dock their phones in hotel rooms. They would still have to get adapters for their cars and sound systems.

Don’t get me wrong, not being able to plug my phone into my current car audio system is going to be a pain in my butt. I am not happy about that. It just isn’t a reason to choose a different phone.

With the iPhone announcement tomorrow, I feel I have to make some predictions. Trouble is, there have been so many leaks that it is almost certain what we are going to see from the iPhone.

Zach Epstein at BGR gives a great rundown of what to expect from the iPhone, and iMore’s Rene Ritchie’s description of the event is spot on. This leaves me precious little to predict. Nevertheless, I like to take a stab at these things, so I will venture a few:

Bonus Prediction: The Telegraph ran an interesting story a while back about a feature potentially named “AirPlay Direct.” The speculated feature would allow an iOS device to send an AirPlay signal to a Wi-Fi enabled device without the need of a shared Wi-Fi network. This is the sort of feature that Apple would make hardware specific, even though the cynical would say it needn’t be. It sounds right to me, but I don’t know if it is coming yet.

Android continues to be an IP infringement lawsuit magnet not just with respect to troll lawsuits (the trolls sue everyone including Apple) but, more importantly, lawsuits from large publicly-traded industry players.

Google’s usual experimental, bold, and haphazard approach to development usually does them a great deal of good. In the case of Android, their care free attitude may be its undoing. They don’t make a ton of money off of Android, and the legal costs are stacking up and could get even worse if/when they start losing.

Last year, when Apple announced iOS 5, Reminders was a new, included app. Everyone thought it was weird. There were already thousands of To Do apps in the app store, and while it brought location based reminders, it wasn’t particularly full featured. You couldn’t even sort reminders. It seemed very out of place.

Then they announced Siri.

Suddenly, reminders turned into a very helpful part of Siri. And Siri, as an interface, made much more sense for reminders, especially when it comes to adding location based reminders.

I felt that same out of place feeling about the Pass Book announcement. “All you pass in one place”? How many passes do they think I have? Scott Forstall already said they are making a Pass Kit API available for developers so they can add their own beautiful passes to the passbook, which is cool, but still seems to be missing something.

I predict that the next iPhone will have a new headline feature, which, like Siri did for Reminders, will make this app make sense: NFC enabled payments. I think Pass Book is going to be a mobile wallet, and the next iPhone will have allow you manage transactions. I think they will allow vendors (like Starbucks, Dunkin’ Donuts, JC Penny, or Home Depot) to create accounts that run through Apple’s ecosystem that allow customer so use their pass book to pay for their stuff. And I bet vendors and customers will love it.

One other small prediction: the next iPhone will get a bigger screen.

Others have guessed this change, but a moment of the keynote stood out to me. When Scott Forstall is talking about new Safari features (90:18), he says:

We’re also adding full-screen supports in landscape on the iPhone to take full advantage of the large retina display.

That word LARGE really stood out to me. I think it was a slip of the tongue. I could be reading into it, but I don’t see 1) why this feature is necessary in Safari with out a bigger phone and 2) why he would say that it is a “large” retina display, when iPhones today have the same size display that they have since 2007.

What does it mean for Apple? I mean, really, how big an impact will this have on Apple?

I will speculate thusly:

All I am trying to say is this: if you like your iPhone, it is because it is a really great product. But do you know what is an even better product? To quote John Gruber:

Jobs’s greatest creation isn’t any Apple product. It is Apple itself.

Just ponder a moment how well crafted your iPhone is and remember that Jobs has been crafting Apple for about 15 years (the second time) and think about the care and thoughtfulness that has gone into it. Apple will be just fine. For a long time. Tim Cook has been running the company for quite some time. He will continue to run it. And Jobs will continue his oversight. And the company will thrive.

Strangely, now that the spec sheet is out, people don’t have as much to grouse about when it comes to the iPad. However, there are still some writers who can’t help but take pot shots at it. I will take as my subject Preston Gralla’s piece titled “Motorola Xoom versus the iPad 2 — the Xoom is a clear winner.” I will include his complete article, but add my own editorial: END_OF_DOCUMENT_TOKEN_TO_BE_REPLACED

“The Daily” has a big obstacle to overcome. Right now the perception is that information is free and people would be crazy to pay even a dollar a week for it.

The only way for them to even break-even is to compete, not on content, but on experience. It has to be smoother, faster, more attractive, easier to read, more entertaining (not the content, the experience) or more customizable or something. If they an do that, they might just win.

David sent me an article that I almost completely disagreed with. It was about 10 marketing mistakes that Apple has made over the years. Maybe in some other post, I will describe why I disagree with his specific claims.  This post, however, is not about the worst marketing decisions, but the best. I think there is one decision that can be credited more than any other for the rise of Apple in the last few years.

In an earlier post, I showed a graph of Mac OS X’s growth speeding up. I think that one of the main factors that contributed to the growing popularity of the Mac is the iPod. I will illustrate this supposition with two badly superimposed graphs. The bar chart represents Mac unit sales, and the line represents iPod unit sales.

iPhone has been an undeniable success, with it’s speed of growth being even faster than iPod’s.

And it looks like iPad is moving even faster (so far) than iPhone. 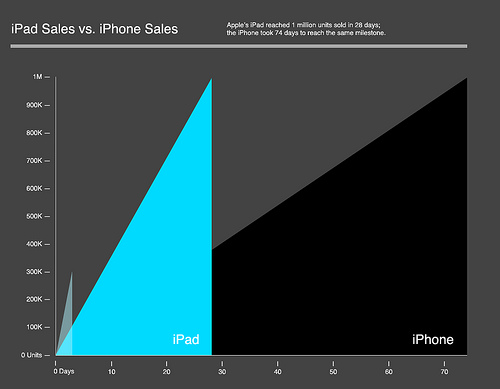 The point: Apple has a crazy amount of momentum, each product using its predecessor as an accelerant. The mystery: what put them on this path? The answer…

The learning curve for operating system switching is a significant barrier to entry for most users. Enough so that my wife doesn’t even want to learn, despite my obsession interest in Apple products. That barrier kept Mac in a niche for years and years. iPod gave people a taste of what Apple products are like, without the learning curve. The iPod embodied what Apple has always tried to create with their products: an experience that is pleasant with a product that doesn’t get in the way of the task at hand.

Many decisions about the iPod were made to help it be successful, such as good product design, easy music uploads, the introduction of the store etc. While these are all important features and benefits, there was one marketing decision that was more important than all of these factors.

In 2000, when I would listen to my Sony Discman, it would sit in my bag or my pocket. For that matter, when anybody listens to portable music, the device sits hidden in their pocket. How is anyone suppose to hear about this amazing device if it hangs out in your pants?

The single best marketing decision that Apple ever made was to make their iPod earbuds white. Unlike other mobile music players, you knew when someone was listening to an iPod. The iPod was a fabulous product, and very worth talking about, but the white headphone helped people to know how many people were using it. This product momentum is what started it all off. iPod led to iPhone which led to iPad, all of which are leading to more converts to the world of Apple. And once they have you, you can’t get away.